African-American and Hispanic job-changing participants cash out at much higher annual rates than the national average. While 40% of all participants who switch employers cash out within the first year after job change, that percentage rises to 63% for African-Americans, and 57% for Hispanics, according to industry research reports.

Participants Cashing Out Up to 1 Year After Changing Jobs 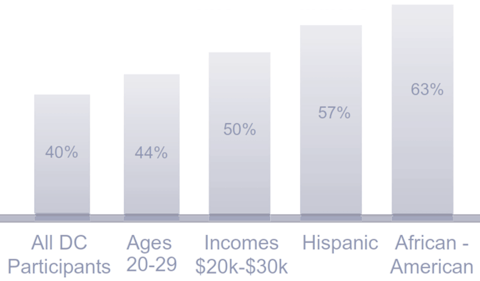 Cashing out is a surefire way for participants to diminish their income in retirement. We estimate that a 30-year-old who cashes out a $5,000 401(k) savings account balance today would lose up to $52,000 in earnings the sum would have accrued by age 65, assuming the account would have experienced 7% growth per annum.

With hardworking African-American and Hispanic workers far more likely to cash out than other participants, our nation has a serious retirement-saving crisis on its hands.

But fortunately for minority workers, this crisis can be readily fixed—and plan sponsors and their recordkeepers can play a key role in resolving it.

The biggest driver of cash-outs is the lack of seamless plan-to-plan asset portability for participants, particularly for those with lower balances. Without an efficient, cost-effective process for moving 401(k) savings from a participant’s account in their former employer’s plan to an active 401(k) account in their new employer’s plan, too many participants find cashing out to be the easiest option at the point of job-change.

Auto portability was developed to simplify the transfer and consolidation of 401(k) savings for participants, sponsors, and recordkeepers, and improve outcomes for all parties in the retirement system. The auto portability solution, designed as an enhancement to the current mandatory distribution process for accounts with less than $5,000, is powered by paired “locate” and “match” algorithms which seek to locate and identify participants with 401(k) savings accounts in multiple plans, and begin taking steps to roll accounts in former-employer plans into an active account in a participant’s current-employer plan.

The implementation and completion of roll-in transactions benefits participants by allowing them to consolidate their retirement savings as they move from job to job, decreasing their propensity to cash out, and increasing their retirement savings. From both business and fiduciary perspectives, sponsors benefit when terminated participants’ accounts are removed from their plans because they can decrease administrative expenses and raise their average account balances—while demonstrating they are taking measures which are in the best interests of participants. After all, ERISA fiduciary protections do not have an account-size filter.

Auto portability has been live for two-and-a-half years, and has been proven to reduce plan cash-out transactions. A white paper published by Boston Research Technologies reported that the adoption of auto portability by a large healthcare services provider led to a 50% reduction in cash-outs in the company’s 401(k) plan.

According to EBRI, the mainstream adoption of auto portability has the potential to preserve up to $1.5 trillion, measured in today’s dollars, in the U.S. retirement system. EBRI also estimates that the widespread implementation of auto portability would, over the course of a generation, preserve savings of $619 billion for 67 million minorities in our nation’s retirement system, including $191 billion for 21 million African-Americans.

Prominent African-American entrepreneur Robert L. Johnson believes the boost to African-Americans’ retirement savings would be even greater. During his remarks at the White House on December 12, 2018, he stated that the nationwide adoption of auto portability “will put close to $800 billion back in the retirement pockets of minority Americans.”

However, despite these extremely rosy predictions, and auto portability’s proven ability to reduce cash-out leakage, this solution still hasn’t been institutionalized among the majority of employer-sponsored plans in the national retirement system.

Last year, the U.S. Department of Labor (DOL) removed the remaining regulatory barriers to the implementation of auto portability, issuing its long-awaited final Prohibited Transaction Exemption after having released an Advisory Opinion in 2018. The DOL guidance clarifies the fiduciary responsibilities for sponsors that roll out auto portability as a new automatic rollover service feature.

All that remains is for sponsors themselves, as well as their recordkeepers, to take the next step by implementing the auto portability service.

If sponsors don’t demonstrate their commitment to helping participants avoid cashing out, and instead transfer and consolidate their 401(k) savings at the point of job-change, then their financial wellness programs, however well-intentioned, will fall short of their full potential.

In August 2019, the Business Roundtable issued a revised Statement on the Purpose of a Corporation, signed by 181 CEOs who committed themselves to running their companies in order to benefit all corporate stakeholders—customers, employees, suppliers, and communities, in addition to shareholders. What better way to fulfill that commitment than to adopt a service that helps chronically under-saved workers preserve their retirement nest eggs?

At a time when financial wellness and corporate responsibility remain hot topics in our national discourse, plan sponsors would be unwise not to adopt a new default solution which helps participants—especially minorities—to improve their retirement outcomes. More 401(k) savings in the pockets of current and former employees benefits them and their families, as well as the communities where they live and work.