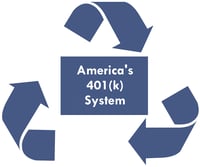 On Earth Day 2019, as we focus on creating a sustainable and eco-friendly environment, it's worth considering how the application of similar principles would benefit our retirement system.  America’s 401(k) system is unsustainable – urgently requiring an upgrade to effectively deliver on its intended goal – helping millions of Americans enjoy a timely and comfortable retirement.  The good news is that we're beginning to see important signs of action that could ultimately address the problem.

The primary symptoms of 401(k) unsustainability include:

The solution – auto portability – will deliver tremendous benefits, but will also require collective action from service providers and plan sponsors to restore this pillar of our retirement system to health, and to create long-term sustainability.

The concept of ‘sustainability’ is ubiquitous in our culture, and its principles have been broadly applied to large swaths of society, including our consumption patterns, housing, economic development, business models, agriculture and energy production.  Sustainability’s goal is to “meet the needs of the present without compromising the ability of the future generations to meet their own needs.”

When examining our nation's 401(k) system, three symptoms point to a fundamental lack of sustainability:

Every year, 14.8 million, or 22% of all active defined contribution participants change jobs, and will consider their options for retirement savings they’ve left behind with a previous employer.  Six million, or over 40% of these job-changers, will choose to prematurely cash out $68 billion in savings.

What gives rise to this level of cashouts?  Contrary to conventional wisdom, only slightly more than one-third of these ‘retirement drop-outs’ need the funds for a true financial emergency.  The rest are simply making poor decisions.  Unfortunately for these bad decision makers, the defined contribution system perversely doubles-down on human nature by making the worst choice (cashing out) the easiest, while simultaneously making the best choice (consolidating retirement savings) the most difficult.

To add insult to injury, plan sponsors (and their consultants) will invest considerable time and money in financial wellness initiatives, improving plan choice, and a myriad of other features, but very few will bother to measure cashout leakage levels, to set goals for it, or attempt to actively manage the problem.

2. The Explosion of Small-Balance Accounts

Over 80% of these accounts are held by participants who have already enrolled in another defined contribution plan with their current employer, so these participants’ accounts are effectively stranded, where they will pay excess fees, earn sub-optimal returns or both.

Meanwhile, former employers are saddled with the cost, fiduciary risk and administrative burden of large numbers of small-balance accounts.  Many plan sponsors will seek to minimize the small account burden by utilizing automatic rollovers, automatic cashouts, or both.  This approach simply exacerbates the problem of cashout leakage, as identified in #1 above.

3. A Surge in Missing Participants

The problem of missing participants in 401(k) plans is pervasive, and has many causes, including:

Additionally, 401(k) plan features such as auto-enrollment (particularly with low deferral rates) can play a role, resulting in ‘zombie’ accounts that former employees never realized they had.

For participants, the ultimate risk of going missing is not getting paid the benefits they’ve earned.

Plan fiduciaries, on the other hand, are the parties held responsible for locating missing participants, and can’t afford to assume that recordkeepers will ensure accurate participant contact information.  It’s up to the plan sponsor to find missing participants, where they must cope with unclear guidance on when and how to locate them.  If their plan is audited, they may also confront inconsistent enforcement actions.

Auto portability is the routine, standardized and automated movement of an inactive participant’s retirement account from a former employer’s retirement plan to their active account in a new employer’s plan.

There is a wealth of evidence demonstrating that auto portability would create a more-robust and sustainable 401(k) system.  The most compelling evidence of its systemic 401(k) benefits was delivered in March 2017, when the Employee Benefit Research Institute (EBRI) presented new research that $1.5 trillion of retirement savings would be retained through auto portability, when applied to accounts with less than $5,000.  Since then, additional EBRI research has pointed to more benefits of auto portability, specifically for women, Generation X and Millennial savers.

For participants, auto portability overcomes systemic friction and as such, directly addresses poor decision-making by turning the best choice (consolidation) into the easiest choice for participants.  This means greatly-reduced levels of cashouts and long-term preservation of retirement savings, resulting in an enhanced standard of participant care.

Finally, for service providers, including recordkeepers, fund managers, financial advisors and others – auto portability would result in increased retention of retirement assets, the foundation upon which their business models depend.

The engine of auto portability is tested and ready, but to facilitate widespread adoption, collective action is required.

The good news is that the Department of Labor (DOL) issued guidance in November 2018, which came in the form of Advisory Opinion 2018-01A and a proposed Prohibited Transaction Exemption (PTE).   The DOL’s guidance, by clarifying the fiduciary obligations of the employer, and by allowing auto portability to use negative consent, created the conditions for a real and profound impact on the retirement system.

By acting collectively and adopting auto portability, America could finally have a 401(k) system that it deserves, one which has long-term sustainability and will generate the retirement outcomes that were originally envisioned.