Plug the Leaks Before Expanding Access to Defined Contribution Plans

In recent months, our attention has been drawn to some deserving public policy initiatives that would dramatically expand access to workplace retirement savings accounts and address the “access gap” encountered by millions of American workers who are presently offered no such option.
The access gap is very real. According to an analysis of the U.S. Census Survey of Income and Program Participation, The Pew Charitable Trusts estimates that 36.2% of American workers do not have access to either a defined benefit or defined contribution plan sponsored by their employers.

One proposal relies upon legislative action to eliminate barriers to open multiple-employer plans (MEPs) and requires private employers to auto-enroll their employees in a defined contribution (DC) plan. Thus, universal access to DC plans could become a reality, and the access gap would be quickly bridged.

Those disproportionately affected by the cashout leakage epidemic include Millennials, lower income segments and minorities, all of whom cash out in greater numbers than the general population of DC participants (see chart). 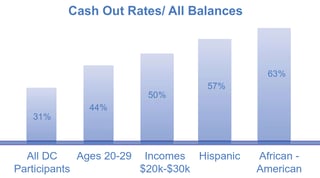 Since these happen to be the very same segments of our population that the Pew research indicates will benefit the most from expanded access, it stands to reason that a surge of participants with these characteristics could exacerbate the problem of cashout leakage, all other things remaining equal.

For plan sponsors, expanding access (particularly in those industries with high employee turnover) could also create a proliferation of small balance accounts left behind by those job-changing participants who don’t cash out. These additional small-balance accounts would create an administrative burden for plan sponsors, resulting in increased plan costs, missing participants and uncashed distribution checks.

The dual problems of cashout leakage and small accounts, if not addressed, could mean that a program of expanded access could eventually become a Pyrrhic victory for the defined contribution system.

A study by Boston Research Technologies indicates that most cashouts occur simply because it’s the easiest action for participants to take. In fact, only 37% of participants who cash out indicate that the reason is a financial emergency.  Providing participants with easy portability of their retirement savings has been proven to reduce cashout leakage by 50%.

For plan sponsors, a program of auto portability would mitigate the problem of small accounts, serving to raise average balances while promoting plan efficiencies.

However, it’s on the human level that the benefits of reducing cashout leakage are most impressive, where the preservation of even small balances can significantly increase a worker’s retirement security:

While it’s clear that whatever can be done to expand access to workplace retirement savings accounts will be beneficial to Americans’ retirement security, it’s also equally clear that we should take steps now to preserve our savings through a program of retirement savings portability, thus putting an end to the scourge of unnecessary cashout leakage.