How Socially Responsible Corporations Will Solve the 401(k) Cashout Crisis

By Thomas Hawkins
Published on February 10, 2020

Every year a silent, slow-motion train wreck occurs in America’s 401(k) system, when millions of job-changing workers prematurely cash out billions of dollars in retirement savings, a phenomenon known in retirement industry lingo as “cashout leakage."

Caused by a highly-mobile American workforce whose 401(k) balances don’t easily move with them as they change jobs — cashout leakage affects every demographic, but hits minorities and women the hardest.

The problem has been ignored for decades, but that’s about to change.

Development #1: Awareness of the problem

Recent, independent research by the Employee Benefit Research Institute (EBRI) and the Savings Preservation Working Group has definitively identified the magnitude of the problem. Each year, at least 4.5 million job-changing participants will cash out $92.4 billion (source: EBRI) in 401(k) savings. The demographic segments most affected by cashout leakage are those who can least afford it, including minorities, women, lower-income and younger age groups. 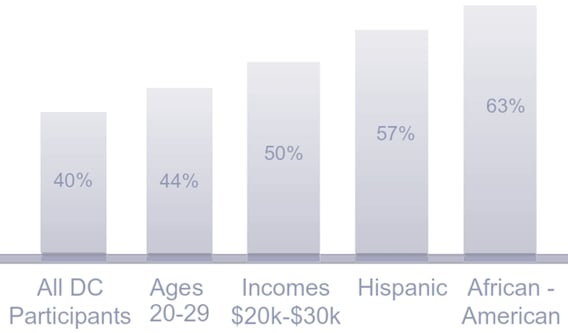 Contrary to conventional wisdom, the bulk of cashout leakage is not due to financial emergencies, which accounts for only one-third of the total. About two-thirds of cashouts are triggered by systemic friction, where it’s very easy (and tempting) for job-changing participants to cash out, yet it’s quite difficult for them to move their balances forward to a new employer’s plan. Participants who cash out realize their folly too late and experience significant regret, according to Boston Research Technologies’ 2015 mobile workforce survey.

Not surprisingly, research also reveals that solving the cashout leakage problem would produce massive societal benefits, which EBRI has projected at $2 trillion, measured in today’s dollars, over 40 years.

Development #2: The emergence of viable solutions

By far, the most-impactful solution to cashout leakage is plan-to-plan portability, which allows 401(k) savings to better accommodate a highly mobile workforce.

Research on portability’s benefits is extensive and uniformly supportive:

The rise of corporate social responsibility (CSR) is serving to extend a 401(k) plan sponsor’s obligations beyond the legal framework set forth by ERISA, to include the promotion of societal benefits. For example, DC plan sponsors are increasingly embracing Environmental, Social and Governance (ESG) screening criteria in plan investment options, despite having no legal obligation to do so.


Recently, large corporations re-doubled their commitment to CSR. ln August 2019, the Business Roundtable released a statement redefining the purpose of a corporation. In the statement, 181 of the nation’s largest employers — including five large 401(k) plan recordkeepers — agreed to promote “an economy that serves all Americans.”

Waking Up and Acting

Recent developments indicate that the retirement industry is waking up, displaying unprecedented interest in plan-to-plan portability. A just-released 2020 Alight survey found that 56% of plan sponsor respondents (representing 5.5 million employees) are interest in “automatically roll[ing] balances from one employer’s DC plan to another employer’s plan when individuals change jobs.”

Writing in Forbes, retirement policy expert Angela Antonelli, executive director of the Georgetown University Center for Retirement Initiatives (CRI), made a compelling case for the application of auto portability to solve cashout leakage, including an urgent call-to-action for retirement plan sponsors to make auto portability “the new normal for employees who switch jobs.”

With the private sector understanding the problem, having access to a viable solution and acknowledging their responsibility to act for the benefit of society, the long-standing scourge of 401(k) cashout leakage could soon become a thing of the past.