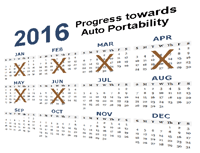 In the first half of 2016, not only has the retirement industry awakened to the problem of cashout leakage, but it’s begun to acknowledge its root cause: a lack of retirement savings portability. At the same time, Auto Portability has emerged as the only viable solution to cashout leakage, delivering portability for the small-balance (less than $5,000) job-changer, automatically moving their balances forward when they change jobs and enroll in a new plan.
Let’s look-back at the first half of 2016 and see how Auto Portability may now be poised to become an “overnight success” in the not-too-distant future.

Kicking off the New Year with a bang, President Barack Obama addressed retirement savings portability in his final State of the Union address, followed by the inclusion of specific portability initiatives in his 2017 budget. The reaction from industry players, including DCIIA’s Lew Minsky, was positive.
In February, DCIIA’s Leakage Task Force released a compelling research brief on Plan Leakage, highlighting data from the RCH-Boston Research Technologies Mobile Workforce Study.  The DCIIA task force took particular interest in the psychology that drives post-separation behaviors, noting the worrisome trends in the Millennial age cohort, and the need to remove “obstacles” that prevent easy transfer of balances into new plans.
In March, Retirement Clearinghouse broke ground on the Auto Portability Simulation (APS) Model, working with Texas State University’s Dr. Ricki Ingalls, Ph.D. The model is a discrete event simulation, the first-of-its-kind to be applied to the nation’s retirement system, specifically addressing the outcomes that could be expected if there were system-wide adoption of Auto Portability.

On May 3rd, the Plan Sponsor Council of America got a sneak-preview of APS results during an Auto Portability session conducted by RCH at their National Conference in Nashville. Immediately following the PSCA event on May 5th, RCH teamed up with LIMRA’s Secure Retirement Institute to co-present Making Portability Work for Participants.

The Auto Portability Simulation was officially announced on May 10th, then unveiled to the industry on May 12th, at the EBRI 78th Policy Forum. The results:  system-wide adoption of Auto Portability will generate over $115 billion in new employer-plan savings for the current and next generation of retirement savers.

Reaction to the APS was swift & positive, with coverage by BenefitsPro, Bloomberg BNA and Retirement Income Journal – all agreeing that important ground had been broken in defining a solution to cashout leakage for small-balance job-changers.

Revelations from the APS model were no doubt part of the conversation when Retirement Clearinghouse met with Labor Secretary Thomas Perez in late May, to discuss the status of a pending Advisory Opinion on the use of negative consent, allowing small balances to automatically follow 401(k) participants, when they change jobs.

Finally, in June the Bipartisan Policy Center released Securing Our Retirement Future, an excellent report that recommended the adoption of processes that enable the seamless transfer of retirement savings between defined contribution plans when participants change jobs. The BPS also specifically recommended the establishment of a “nationwide private-sector retirement security clearinghouse” – a concept that Retirement Clearinghouse obviously applauds!

While we don’t have a crystal ball, we do believe that the second half of 2016 will bring important advancement towards the goal of retirement savings portability, including: